California was first colonized by the Spanish in the sixteenth and eighteenth centuries.  Native Americans migrated into the valley close to the San Gabriel Mission, and were later known as the Gabrielinos. The eighteenth century brought more settlement and immigration into California with families settling into the La Ballona Valley. 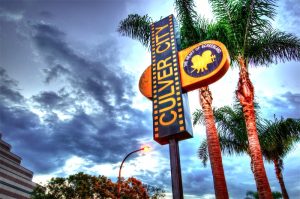 The land was populating with ranches, and farmers. In 1850, California became the thirty-first independent state. Harry H. Culver founded the city in the early 1900s. The area was ideal, as the city was located along the railroad and other transportation routes, located also outside of Los Angeles which was growing in population. The city development continued on for Culver City, which eventually contained a central main street, fire and police departments, paved roadways, schools, businesses, and more industrialization. Census in the year 2000 showed a city population of around forty-thousand residents.

Culver City established an art program in 1988 which contained a focus on the cultural arts and providing artistic resources. The program is called the Culver City Art in Public Places Program. The program features art which is divided between private collections and city collections. The goal of the community arts program is to enhance the city with an awareness of the arts, as well as progressing towards art education programs, and supporting the artists within the community. The program also features grants to the artists within the Los Angeles community.

See art performances in Culver city or Los Angeles as featured by the Culver City Arts Program. The array of programs available includes musical disciplines, theatre arts, opera, symphonic, and various style of dance. These performances of are often done through not for profit art related organizations. Culver City boasts more than seventeen art galleries for its visitors to enjoy; The Century Guild Gallery, the Circa Gallery, Fresh Pain Art Contemporary Gallery, Fabian Castanier Gallery, Gallery nine and many others.

Take tour one of several museums in Culver City. The Historical Society there showcases exhibits of the collections of local artifacts, art history and culture. You can also enjoy the Museum of Mayme A. Clayton and its library which features one of the largest, authentic, educationally rich and independent collections of objects, literature, and other articles displaying and preserving African American culture and its history. Sony Pictures Museum is also located in Culver City, offering a fun filled exciting adventure for families and individuals to explore the filming industry, with behind the scenes exhibits and displays for the public to enjoy. If you like animals or wildlife visit the Star Eco Station; It’s a museum for sciences and animal sciences which is located inside Culver City. The Star Eco Station also features a safe haven for animals which are endangered or were retained after they were confiscated by officials in the United States Wildlife Service. You can also enjoy the cold-war focused museum in Culver City. The Wende Museum contains a unique collection of the historical artifacts, films, documents and art of the cold-war 1945-1991 primarily featuring East European objects and the Soviet Union works. With so much to do, including tours of the town, Culver City has plenty to share with everyone. Explore the beautiful parks, the unique museums, or shop at the local farmers market. Just hop on the Metro Expo and you can enjoy Culver City which is located just outside of Los Angeles.