Perched atop a hill next to Elysian Park, Robert Stacy-Judd’s Atwater Bungalows combine the features of a Pueblo Indian kiva with the fantasy of a Hollywood stage set. The two bungalows are built of thick, unfinished stucco, with Pueblo-style windows, doors, stairways and other features.

“There is a surrealistic atmosphere to this design, with its undulating parapets … oversized wooden drain spouts, projecting wood balconies and rows of vigas,” David Gebhard wrote in a 1993 monograph on Stacy-Judd. And Christopher Hawthorne, architecture critic for the Los Angeles Times, has written that “To wander through Robert Stacy-Judd’s neo-adobe Atwater Bungalows …is to be convinced that you are, first, completely isolated from city life and, second, that you are in a place that could only be Los Angeles.”

“A Socialist and a Peacenik”

The story of the Atwater Bungalows begins near the turn of the last century. Sometime around 1910, ten years or so after he began a dentistry practice in Los Angeles, Dr. H. Gale Atwater and his wife, Beulah, began buying up what eventually amounted to more than 20 lots along sloping Avon Park Terrace, high atop one of the many steep hills of Echo Park, an area adjacent to Elysian Park, northeast of downtown.

Echo Park had been the site of the city’s first housing boom, in the 1880s, and later was the first seat of the Southern California movie industry. The Atwater family home soon rose near the top of the property. But Dr. Atwater, described by his grandson, 67-year-old Ronald Atwater, as “a Socialist and a peacenik” with an apparent penchant for exotic architectures, wanted to continue building. He had developed an avid interest in Native American culture, perhaps influenced by Charles F. Lummis and others who had begun promoting American Southwest indigenous culture in the latter years of the nineteenth century and the early years of the twentieth.

“He was quite taken with the philosophy of the Hopis, whom he considered a peaceful people,” Ronald says. “He was intrigued by Indian kivas and made trips to New Mexico to collect Indian blankets.” Not long after the family home was completed, Dr. Atwater designed two Hopi-style bungalows for the property. The construction of those two bungalows was completed around 1922, but Ronald says his grandfather “wasn’t satisfied with the outcome. He thought they were Ronald says that the cost of building the two bungalows and two garages Stacy-Judd designed far exceeded the estimate of $7,800. Although he doesn’t know what the total cost was, he recalls “there was such an overrun that my grandparents had a falling out with Stacy-Judd. They loved the houses but not the architect.”

The Atwaters’ financial concerns were heightened when construction was completed in 1931 and they were hard pressed at first to find tenants who could afford the rent. In time, though, the striking buildings became highly desirable places to live for those who appreciated their odd charm. Although they have different floor plans and different details, both are spacious, with full dining and living rooms, three bedrooms, and two bathrooms with their original tile intact.

Ronald, who lived in both of the bungalows when he was younger, took over the family’s property from his father more than 20 years ago. At that time, the bungalows were in serious need of repair. The flat roofs don’t shed water as well as peaked roofs,” he says. “Rainwater was leaking into the interiors, damaging the plaster inside. The plaster had to be repaired and the hardwood floors had to be redone. I spent quite a bit of effort and expense to maintain the buildings.”

Now living in Santa Barbara, Ronald stays in the small and simple Hopi-style apartment his father designed when he’s in town. Unlike his grandparents, his father always disliked the flamboyance of Stacy-Judd’s buildings. “He thought there was much too much fantasy with this crazy Aztec stuff.”

The bungalows’ current residents have been there for many years and have no intention of moving. Motion-picture production designer Barbara Ling is awestruck by Stacy-Judd’s design even after having lived in her bungalow for 15 years. “It’s an extraordinary environment,” she says. “Every corner is just unbelievable. I particularly love the upstairs. There’s a door that comes off the second floor that takes you outside, where there’s a patio that’s on the same level as the bedrooms. It’s a ‘living rooftop.’ ”

Says Ling’s neighbor, Richard Acerra, who has lived in his bungalow for 25 years, “I hope I can afford to buy the house if Ronnie [Atwater] decides to sell it.” An interior designer, Acerra also relishes the interior features of his home. “The air flow inside the building. The high cathedral ceiling in the living room. The Mayan windows. There are so many details in the house. The guy was a genius.”

Acerra points out the many features that make living in the Atwater Bungalows a special experience: “The history of it, the flat roof, its location on the hill. You drive down the dirt road to the entrance and it’s like entering paradise.”

A Mayan “Revival”
In the Los Angeles of the 1920s, Dr. Atwater wasn’t alone in his fascination with unusual architectural styles. Native American and “Hispanic/Mediterranean” motifs were finding “a warm and appreciative audience” in the region, Gebhard wrote in Robert Stacy-Judd: Maya Architecture and the Creation of a New Style.The mid-to-late 1920s were also the heyday of interest in Meso-American archeology and the idea that Native American styles could be the basis for a new all-American architecture.

Stacy-Judd was born in London in 1884. His first architectural commissions were in England, where he designed homes and hotels in the Beaux Arts style that was popular in the early years of the twentieth century. He emigrated to the United States in 1914, settling and working in Minot, North Dakota, until 1918, when he moved to Alberta, Canada.

“Like many other architects in the west, whether in Canada or the United States,” Gebhard wrote, “Stacy-Judd responded warmly to the bungalow as the ideal middle class house type. Stacy-Judd himself, in an article published in the Calgary Daily Herald in 1922, wrote, “In modern times a type of dwelling has evolved which easily takes place as the ideal home. I refer to the bungalow. The term originated nodoubt in India, but the bungalow of that country is not in comparison with its modern namesake. The most popular is what is known as the ‘California.'”

Gebhard continued: In the planning of the “modern” (including, of course, the bungalow) he argued for informality, for combining living and dining spaces into one room, for providing sunny [ideally facing towards the east] breakfast nooks off the kitchen, and for laying out the basement so that it could provide space for a family gaming room. His observations about eliminating interior details which “are breeding grounds for unwelcome germs and a remarkably effective resting place for dust,” [are] similar to the puritanical arguments of the early California modernist, Irving J. Gill.

Stacy-Judd designed “Californias” and other homes when he moved to Los Angeles in 1922. His most famous commission, however, was not a residence but a commercial building—the Aztec Hotel, built in the city of Monrovia and completed in 1925. The hotel, which is currently being restored, was designed in a Mayan style, which Stacy-Judd touted as the logical form for twentieth century architecture.

A flamboyant publicist and showman as well as an architect, Stacy-Judd wrote and lectured about Mayan architecture and traveled to the Yucatan jungles to explore Mayan pyramids. By 1930, public interest in both Meso-American architecture and Stacy-Judd had waned. But his writings and lectures, and his Aztec Hotel in particular, had captured Dr. Atwater’s fancy, and the dentist commissioned him to build two more Hopi-inspired homes on the Avon Park Terrace property.

He could not have selected a more appropriate person for the job. The bungalow at 1433 Avon Park Terrace is on the lower part of the hill, while the adjacent bungalow, at 1431, is at a slightly higher elevation. The hill continues to climb eastward to the end of the street, where a dirt driveway leads to the Atwater family’s former residence and a one-unit apartment building— yet another Hopi-influenced project—designed by Ronald’s father, the late Eugene Atwater. 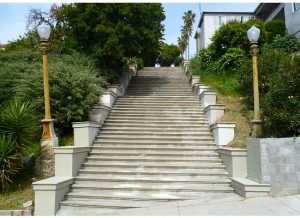